3 TIPS TO STAND OUT AT A SHOWCASE

Are you attending showcase tournaments, maybe even this weekend?

Your club coaches have stressed for you the importance attending a showcase tournament (or several), or maybe you have already attended one or more. It is different than a tournament. At these events, you have probably heard from your coaches that you are showcasing your skills. Teams like to win, but this is the one event in which winning is a secondary goal. The primary goal is for college coaches to see high school athletes and if they like what they see, to contact them.

The showcase tournament from the college coach’s view

I want you to step outside your experiences with showcases. Consider the weekend from their perspective. College coaches will often go to showcase tournaments several weekends in a row. They will spend a couple nights in a hotel. They will spend 8-10 hours out on the field or court watching game after game. The event will usually have a coach’s tent full of food and drinks to keep the coaches happy. Still they are in for a long weekend, preceded by last weekend and with next weekend to look forward to, and lists of athletes to watch.

Showcase tournaments are a numbers game

The college coach is there because there are thousands of players to look at in the same place. They did not come just to see you play. They came to see you and a hundred other players like you as quickly as they can. You may not notice, but coaches are not even watching full games. They are watching your team play for 20 minutes or half a game and then they move on because they have a lot of players to see. Efficiency is the name of the game.

What you need to do after attending a showcase tournament

After the event the college coach will begin contacting players they are interested in. They have watched dozens of teams and hundreds of players. Don’t be discouraged if the coach doesn’t know exactly who you are or which game you played in. They probably saw you, made a few notes and moved on to one of the other 100 plus players that they will contact in the ensuing days. While a few players will stick out in their mind, many just become a number until the player shows interest in the school and athletic program. From hundreds of contacts, they will determine who is interested and continue to recruit a smaller number of players. A coach cannot rely on picking ten athletes and expecting that they will all come play in their program.

A Good First Question for the Coach

Always ask a coach, when they first contact you, where they saw you play and make sure to ask what they liked about you and what position you were playing when they saw you. This will help weed out some of the coaches who have no idea who you are and are willing to lie to you from the first conversation. Others wouldn’t lie to you, they just may not remember you. Working from their notes they should be able to tell you how you would fit in with their program.

What Coaches are Looking For

Coaches are not looking for only the very best 10 players at a showcase tournament. The best programs have already found and are courting those ten best players. Most coaches are looking for players who will help the team, but will also realistically consider their program. Coaches are sifting through all of the other players who may still be available. They are looking for starters and bench players. (A bench player in a great program could have been a super-star at another school. Remember this as you choose your college!)

Here are three tips you can do to make the most of a showcase tournament:

If you follow these tips, you will set yourself apart from most of the other players. The recruiting process is about standing out and getting noticed. It is about communication. It is about marketing yourself.

And don’t forget to enjoy the games! That is, after all, why you play.

How Do You Get College Coaches to Notice You? 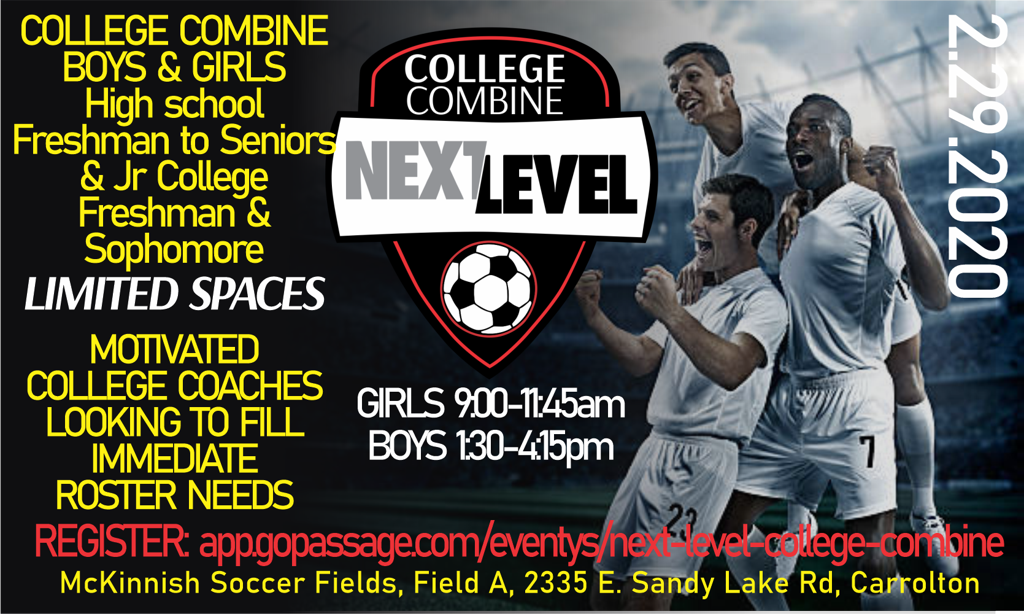 Next Level College Combine has been established to bring motivated college coaches looking to fill immediate needs for their upcoming fall roster, as well as the same motivated players also looking for a team to play on.

The college combine is for high school freshmen through senior players. It is also open to Junior college players looking to further their playing and education at a 4 year school. Early Bird pricing is currently set at the low price of just $35 which includes a combine t-shirt. Sign up and take advantage of this great offer before the end of January. The combine will be separated into two sessions for girls and boys. This combine will be coached by the college coaches attending.

Don't wait to register and be left disappointed!!

We are looking for motivated coaches to attend the event.